I wrote Invisible Boys because I wanted to show the world that boys and men suffer, and how our suffering shows up in various ways.

Sometimes our suffering makes us small and quiet and self-loathing, like Zeke.

Sometimes it makes us angry and confrontational, like Charlie.

Sometimes it just makes us seem like arrogant “dickheads”, as many people have described Hammer.

In almost all cases, however, men and boys suffer with one almost universal commonality: we usually do it in silence.

This silence is killing us. Suicide is the biggest killer of men under 40. We’re taking our own lives at a rate TRIPLE that of females, and this stat has not budged for AGES.

We don’t open up and say how we’re feeling, and I am convinced, in my bones, that if we gave ourselves permission to be vulnerable, and boldly tackle what’s going on inside, we would help ourselves to suffer less.

I believe developing the muscles required to be vulnerable makes a man more masculine, not less. The willingness to bare our souls, to face what is within us – whether virtue or demon – makes us braver and stronger and more assertive and more powerful. And yep, more manly. 💪💪

So today let’s acknowledge that the struggle is real for men and boys all across this fucked-up planet – not just gay guys, but all guys.

And in all the earnestness of this post, let’s not forget that today really ought to be a celebration of men and our awesomeness, not just a lamenting of our issues.

So here’s to all the legendary blokes out there, being heroes and lovers and fathers and sons and brothers and soldiers and healers and leaders and artists and sportsmen and dreamers. Here’s to the blokes who are tough as nails and those who are gentle as a feather. Here’s to the slack and the ambitious, the pristine and the traumatised, the stoic and the empathetic, the passionate and the larrikin.

Here’s to us men, being what proud of what we are and working hard at what we could become. 💪💪

This is a day, and a cause, close to my heart because of what I went through growing up.

Getting help for feeling depressed and suicidal is something I have *never* regretted. As a man, it made me feel stronger, not weaker, to tackle my problems head-on by getting support. And it made me want to keep living. 💪💪

I say this in particular because male suicide rates are triple those of female suicide rates. Triple! And even worse for men who are gay, bi, trans or intersex, or who are indigenous, or who live in rural areas, or who are elderly. Instead of seeking support or help when we’re in crisis, us guys often stop talking, shut down and isolate ourselves. I want to help others but particularly boys and men know that talking about how we feel is a source of strength, not a source of weakness. Learning how to be vulnerable and manage our emotions will literally save our own lives. Showing our mates that it’s okay to be like this will help save theirs.

I wanted to share two things with you all today.

Firstly, I wrote a new article for my publisher Fremantle Press about my own experiences with mental health issues and suicide and how this led to my decision to become an ambassador for suicide prevention organisation Lifeline WA. If you or someone you know is in crisis or thinking about suicide, get help immediately. Call Lifeline on 13 11 14. These guys are absolute legends. 🙌🙌

You can read that article here.

Secondly, on a slightly more personal level, I want to share a song I came across when I was bleakly suicidal at the age of 18/19.

The song is “Joining You” by Alanis Morissette. This song was the one that blew my mind, that helped start to pivot me around to rethinking whether death was the best option, because it didn’t just say “don’t kill yourself, dude” or “life is worth living” or anything generic or meaningless.

It said, “Well, if I saw the world the way you’re seeing the world right now, I’d be joining you. I’d kill myself, too. But, this isn’t what the world is. You’re seeing it wrong. You aren’t your body, your culture, your future, your denials, your emotions, your afflictions, their condemnations. These things are not you and you’re more than any of them, and none of them are worth taking your life over.” The underlying message being, effectively, fuck everything that’s hurt you, and live anyway.

I’ve always found this song helpful – to getting through those moments of suicidal ideation, and also to processing the resultant trauma and shame of having those feelings in the many years since.

Big love to you if you’re struggling atm or if someone you know is struggling. Seriously, reach out, even anonymously. It makes it much easier to breathe once you tell someone else how you feel. You can always call Lifeline on 13 11 14, too.

When I was a teenager, I wanted to kill myself because I was gay.

Growing up gay in country WA was a uniquely isolating and traumatic experience. I found my homosexuality completely at odds with my identity as a man, and trying to reconcile the two identities seemed impossible.

I have finally shared my story, for the first time, as part of the Bright Lights, No City storytelling project at the Centre for Stories.

If my story resonates with you, please share it – with your friends, colleagues, students, and with gay people but also with straight people. I told this story partly for myself (catharsis, healing) and partly to help others out there going through the same stuff. Too many LGBTQIA+ youth go through hell, in silence, trying to come to terms with their identity. Too many don’t survive.

I want to do my part in helping to change that.

This is the link to the audio.

If you listen – thank you, it means a lot. 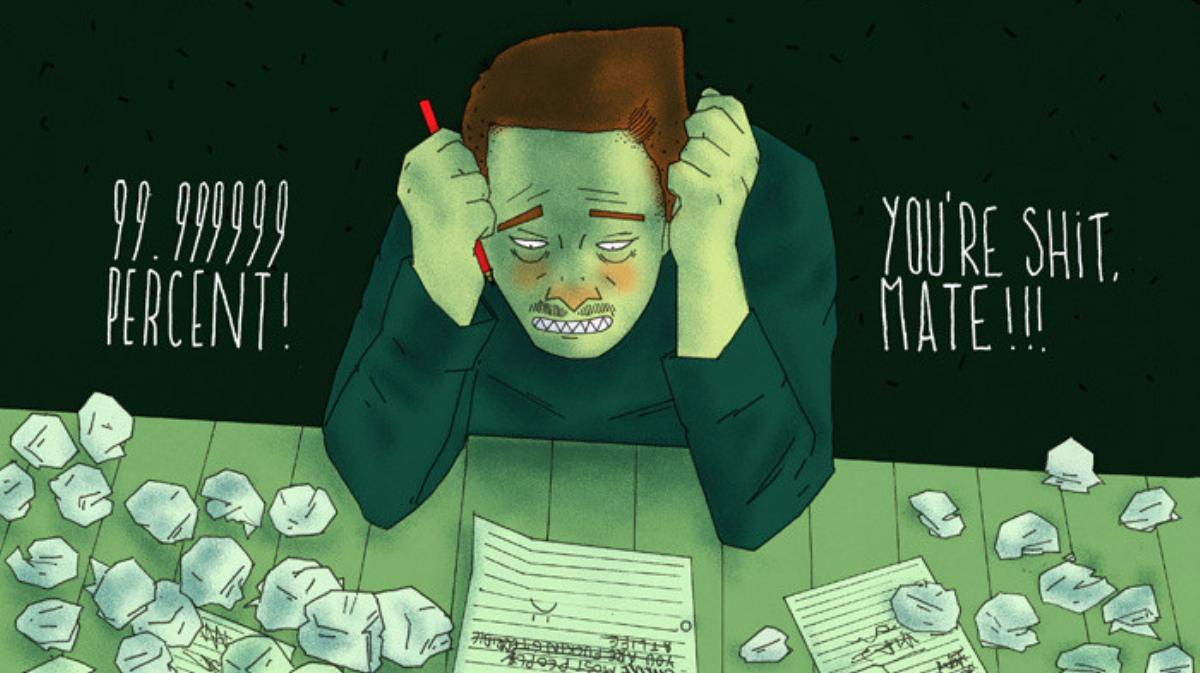 That I put too much pressure on myself is not new information.

In fact, this is one of the oldest things I know about myself. My own expectations of what I should be achieving have shackled a yoke to my shoulders since I was a boy.

It’s the reason I took on five casual jobs last year, and subsequently burned out.

It’s why, a few years back, I made the reckless decision to complete an Honours degree in Writing whilst also doing a Diploma in French and a professional certificate simultaneously, alongside four day jobs. This was the workaholic version of sitting at a table in a burning house and saying, “Guys, I’m fine. This is fine.”

And I can track this kind of learned behaviour back a long way. It’s why I had a massive meltdown in the first few weeks of year twelve: I was trying to overachieve, and take on every opportunity that came my way, and it was utterly unsustainable.

It’s easy to look back on a bright (if slightly neurotic) sixteen-year-old boy and tell him to chill the fuck out, but at the time it wasn’t such an easy task, because I kept telling myself I should be doing more … and I still am.

In fact, the word “should” has always been the most violent word in my vocabulary, especially when I apply it self-reflexively.

I tell myself I should be:

The last one is the real kicker. It’s actually impossible to satisfy my expectations of how productive I should be, because every second I spend Tweeting, or at the gym, or napping, or playing video games, is a second my brain tells me I could have been writing. There is always more I could be doing.

Somehow, my poor brain got snared on a belief at a young age, and I still haven’t ripped the hook out of my bleeding mouth.

If you aren’t as productive as possible, you are not good enough as a human being.

Recently, I’ve realised just how common this self-flagellating behaviour is among fellow writers. A fellow Perth-based author was recently on Twitter having a mild freakout about her own (perceived) lack of productivity. Having just finished a novel a couple of months ago, she felt like she was not really a “writer” anymore because she hadn’t written anything since. She was promptly reassured by many, including myself, that this was totally normal, which was encouraging to see – and emblematic of the supportive culture among authors.

What struck me about this, though, was how very easy it is for me to be kind to another writer, and how hard it is to be kind to myself.

I have a good sense of what expectations are reasonable for an author and what is too much –but when it comes to my own career, I am a tyrant. Nothing I do is good enough. Even amazing steps forward in my career only delight me briefly, and then it’s back to, “Well, what have you achieved lately?”

Sometimes I feel like if I don’t achieve anything substantial – meaning I receive external validation in some way – in any given week, it was a failed week. If a whole month of this goes by, I am a failed author.

This showed up most recently when I did my writing residency at Varuna. The weight of expectations I placed on myself to churn out absolutely phenomenal writing and make shitloads of progress on my third novel was extraordinary, and so cruel.

And it’s happened since I returned home, too. Even though I know my calendar is particularly rammed until June, leaving me incredibly time poor, I’m still riding myself like a meth-fuelled jockey. I should be making faster progress on my third novel. I should be writing some new short stories and submit them to journals and competitions. I should release something new as an e-book. I should blog more frequently.

In one way, it’s heartening to know, via Twitter, that so many other authors are going through these same inner struggles.

But in another way, it’s tragic, because it means we are all being so fucking hard on ourselves.

So, what am I going to do about it?

Well, I already know how to be kind to other authors, so I’m going to make sure I keep doing that. The big challenge ahead of me is to start being nice to myself. To ease the pressure off a little, and be happy with excellence instead of perceived (and unattainable) perfection.

I will never, ever be as productive as I want to be in my mind. I am a human being. I will get busy, and I will get tired, and sometimes what I want to do won’t always be realistic, or reasonable, or kind. Some days, I’m going to get home from work and will be in that general “fuck the world, I’m not doing anything else all night” mood. I think this is okay sometimes.

So I’m going to replace the word “should” with the word “want to”, and use that as the test of whether or not I ought to proceed with something.

Will I continue working hard on my third novel? Of course, but because I want to, not because I feel I must. My ambition and my drive won’t falter, but I’m going to make sure my self-care ranks as just as important as my goals. It will be an eternal balancing act, and I’m sure I’ll fuck it up several times as I learn my way.

But, eventually, I should get it right.