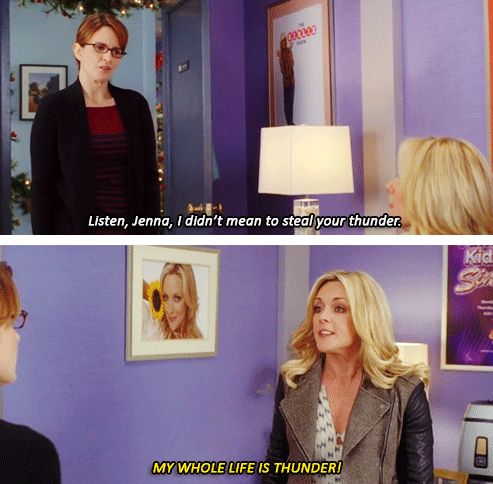 Everyone knows musicians and actors live for the spotlight and can sometimes tend to the narcissistic end of the spectrum. As Lady Gaga sang back in 2013, musicians “live for the applause”. 30 Rock‘s Jenna Maroney (Jane Krakowski), an actress on the show-within-the-show, gave perhaps the best response when someone suggested they had stolen her thunder, dramatically screaming, “My whole life is thunder!”

Maybe a lesser known fact is that us writers also crave the limelight. Even the most introverted among us desire some level of attention: the quest for publication alone is admission of a desire for external validation. If we did not want a little thunder, we would be quite content to write endless novels on our laptops and leave them there until the beginning of the digital dark age.

But we want publication because like Gaga and Maroney, we have some level of fame whore within us. We create stories and worlds, and it’s a nice feeling when someone who isn’t us reads them and goes, “Oh, that’s so cool.”

I don’t think it’s super cool to admit we like the attention. Especially in Australia, where such an admission is going to get you chopped down (see: Tall Poppy Syndrome). But to some extent, it’s the truth for every artist, no matter how humble they try to appear. I’m not the only writer who likes the attention, surely?

I got to enjoy the view of my first few streamers of electricity this week. Firstly, I spotted my story The Scroll of Isidor charting on the Barnes and Noble bestselling fantasy short stories list (it started at #45, crept up to #31, and has now slid back to #33). That was a cool feeling, because it quantified the success of this story in an understandable way. I’ve been tracking the sales for the e-book, but it’s hard to know how they stack up compared to others in the field; a chart eliminates that query. It’s nice to enjoy a small modicum of success. As I like to think of it, it’s a taste of things to come.

A second burst of lightning came when I was profiled for the first time as an author. After we crossed paths on Goodreads, book blogger Mercedes Fox interviewed me this week for her website.

I had heaps of fun talking about my work as a writer and what drives me. The hardest question was about my favourite fictional character. I ended up choosing Nathan Drake from the Uncharted video game series, but it was a tough call. I tend to like intelligent, witty, dry-humoured alpha male characters, and there actually aren’t that many well-crafted ones out there. Drake, however, is a sick cunt. If I could be anyone fictional, I think I’d be him. When I was a kid, I liked Tintin a lot, but in terms of being a 3D character, he’s a bit lacking and rather milquetoast. Drake is like a more buff, more hardcore, more awesome version of Tintin, but more likeable than Indiana Jones.

We also talked about me getting carried away writing sex scenes (a challenge since I write YA!) and having an existential meltdown in 2014 and how that turned my life around and made me a harder worker.

You can check out the full interview here.

So this was a big week, and like any slightly self-obsessed artist, I did enjoy the burst of attention. But now I’m hanging to crawl back into my hermit shell for some weekend downtime. And by downtime, I probably mean working on my current WIP. And possibly binge-watching Riverdale, because I was a huge Archie Comics geek growing up.

Wishing you guys an ace weekend: read and write well, and remember, like Jenna Maroney, YOUR WHOLE LIFE IS THUNDER!